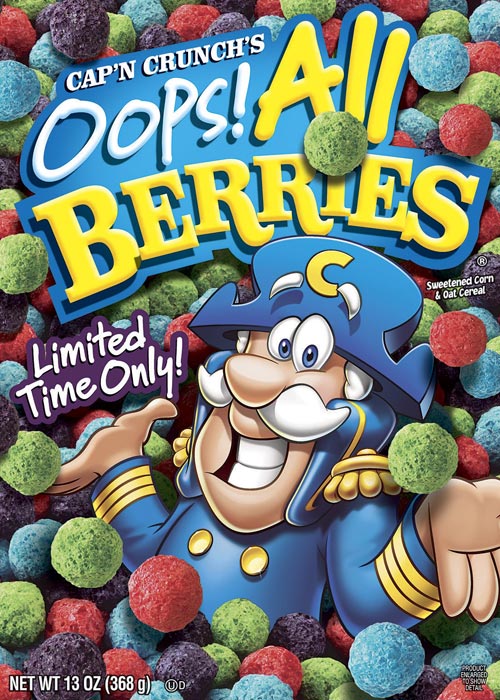 Growing up, the best cereal in the world was Cap’n Crunch even though eating it felt like I was chewing on fiberglass. Experiencing that cereal always came with the price of tearing up the roof of my mouth but it was always worth it. As I ate, I would work around the crunch berries so that by the end of the bowl, all I had left were…well, crunch berries. Even though it was a satisfying experience, I longed for a way to make the separation process easier and faster.

I remember it like it was yesterday.  My younger sister and I were sitting at the breakfast table with a freshly opened box of Cap’n Crunch cereal and a plan.  Christina and I knew it had to be a clandestine operation because what we were about to do would be looked at as “playing with our food” and that was a big no no at our house. One of us would keep watch for our parents while the other dug through the box in a frenzied search.  The goal?  To create the holy grail of cereal experiences – an entire bowl of nothing but Crunch Berries!

Getting caught would mean having to spend a half hour or so in the corner but it’d be a small price to pay for such a sweet prize. The real concern was how we were going to get rid of the remaining leftover yellow pain biscuits when we were done.  We certainly didn’t want to eat those!

My sister and I both agree, that on that day, we experienced the best bowl of cereal that we ever had…and we earned it!

When we first saw a box of Cap’n Crunch’s Oops! All Berries we were over the moon. No longer would we have to waste our time sifting and sorting.  We could simply relax and shovel the crunchy, flesh tearing berries into our faces with reckless abandon because someone had done all the hard work for us!  I’ll tell you what though…when we tried our first and only box, we no longer enjoyed the experience of the cereal anymore. All we could taste and feel was the pain because there was no meta-goal to distract us from it. It was the very gimmick that drew us to the product in the first place that turned us off of it for good!

But, there was a positive side.  That experience changed our lives for the better because from that day forward we thought about things differently. We learned that if we were just given a bunch of what we liked and nothing else…it just wasn’t satisfying!

Let’s take Starburst fruit chews as an example shall we? Even though I can now get an entire package with just my favorite flavors, I don’t want it. When I was a kid, the original packaging created a bit of mystery as I peeled just enough wrapper to see the next flavor while hoping it was red.  When it’s all red, even though they are my favorites, I become numb to them and the fun is gone. Lesson learned.  I need to sing for my supper.

Now, this brings me to the Better Made Potato Chip Company of Detroit.  This company is the exception to the rule.  It has been around since 1930 and in my family it represents staple treats during my trips back home. Sure, they produce the usual variety of chips that you’d come to expect with their standard chip, the bbq chip and sour cream and onion. But there is one chip type that they corner the market on and that is The Dark Rainbow Chip.

What are Rainbow Chips you ask? It’s the Oops! All Berries of potato chips and for me they are the best. To many of us, when a bag of normal chips is opened, it’s a race to see who is going to get the 3 burnt ones because they taste better than the others. They are flavor beacons and they go fast. The reason they are burnt in the first place is that some potatoes have a higher sugar content than others and caramelize more when cooked. There was a time when the dark chips were considered rejects within large batches of regular chips and the company would package hem together as “Rainbows” and sell them to people who specially requested them. These days, the diabolical geniuses at Better Made use special potatoes that have super high sugar content so that they can make entire batches of dark chips at one time. Now just so you know, I don’t want to live in a world of Oops All Everything, but in the case of these chips I’ll make an exception.

I make the exception for 3 reasons:

1) There’s still some variety of darkness to choose from within the rainbow.

2) These chips can only be purchased in one city.

The Rainbow Chip is just one of the many gimmicks that keeps me coming back to Detroit year after year and if you want to try some for yourself, you’ve got it pretty easy.  You can simply order a bag or two from this link right here.