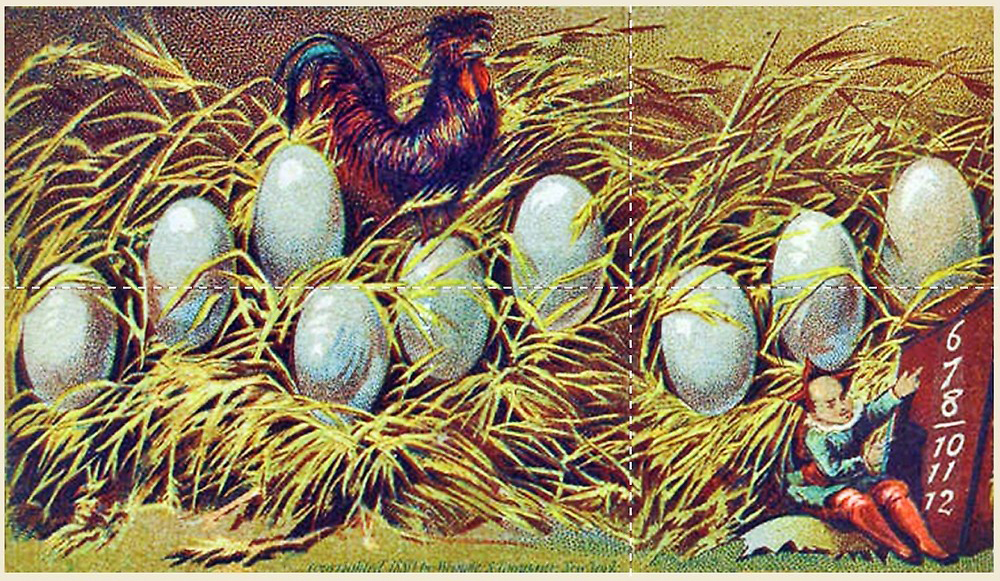 Recently, my talented magician friend Jordan Gold summed up the idea of magic in the following way —

Magic is simply the feeling you get when experiencing something wonderful. It doesn’t have to involve decks of cards, shiny objects floating in mid air or being fooled.

The century old “Magic Egg” artwork above is a form of something called a concealed distribution puzzle. It fits Jordan’s definition of magic perfectly and the concept has been around for over 500 years. The artwork is divided into 4 distinct areas and when reassembled in unique ways, the number of eggs the hen sits with changes. The permutation below below has been created by switching only the bottom two pieces which causes an egg to vanish!

And when the top two pieces have been switched, two new eggs come into view.

The puzzle below does pretty much the same thing but works through a different principle — here, the Earth rotates on a central pivot point and delivers two outcomes. Before the rotation, there are only 12 characters but afterwards a new one magically appears!

I love hidden surprises like this, which is why I’ve concealed something below for those fascinated by magic, ventriloquism, contortionists and vaudevillian entertainment in general.

My friend Scot Nery hosts a Hollywood based experience called Scot Nery’s Boobie Trap which is a 2 hour showing of the best performers in the world, including my talented magician and ventriloquist friends, Jordan Gold and Karl Herlinger.

The first 10 people to flood Scot’s inbox will receive free tickets — and what could be a more magical concealed distribution than that?!

Oh, man! So glad to be part of this show 🎉 get tickets for next week… https://boobieLA.com