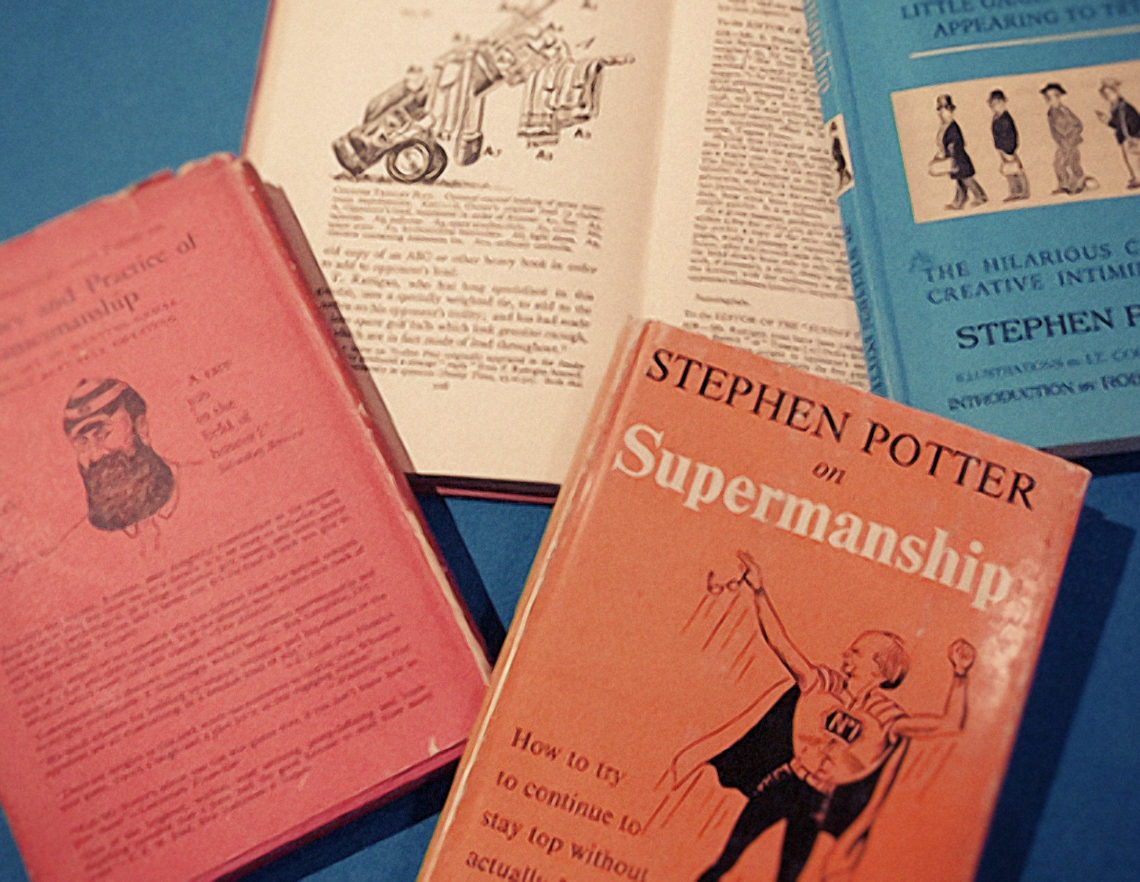 I’m not saying that I’ve ever been truly cool, but I can say with great certainty that, right now, I am not uncool. This beautiful state of being doesn’t just happen overnight. For those of us not born with the cool, it takes a whole lot of work, even more luck, and sometimes a push in the right direction.

After years of awkward, social fumbling at school, followed by years of failing in my first experiences in the workplace — I knew I needed help. I just never thought it would come from tiny books that were written in the early 1960s. When I stumbled upon Stephen Potter as a teenager at our public library, I knew I had found something very special. His books literally changed my life because they taught me how to win…at everything — even when I lost.

The first of his books that I read was called Three-upmanship, and it walks a delicate tightrope between “hilariously outrageous” and “amazingly insightful.” The primary focus of the book is teaching you the art of a term Stephen Potter coined: Gamesmanship.

This art works its way into every aspect of your life, if properly embraced. The better you are at applying the tactics learned in his books, the less people will know that you are up to anything sneaky. It’s like when a great magician false-shuffles a deck of cards. It works because no one sees that it’s happening… but it is.

But beware: there may come a time when the very act of Gamesmanship becomes more important than the game itself. It is very easy to be seduced by such things because when it works, it’s magical.

Though the books steadily give you “rules to live by”, they are delivered tongue in cheek. You will, therefore, have a decision to make from the very start: will you simply laugh at how outrageous these teachings are? Or realize that a well-timed delivery of a breath mint to a billiard opponent really can be the difference between victory and defeat.

When I met my first and only wife, I told her about Stephen Potter’s books and how so many of the mechanics play a part in our lives. She knows my secret. Because of this, whenever I do something out of the ordinary she’ll say something like, “If I didn’t know you so well, I’d think you were a pretty amazing person.”

Of course, that seems like a back-handed compliment, doesn’t it?  And it is. It too is a form of Gamesmanship… and I love it!

Until now, only she and my sister have known about this hoard of information — my most prized secret of secrets. But since I am now officially an old man, and have gotten the chance to benefit from Mr. Potter, I am passing him on to you. I only ask that you do not use what you learn against me and that you’ll only use it for good…

Bah! That’s impossible and I know it! Do what you want with it, and don’t look back! Live long and prosper!

When you’re done reading these books, you’ll effortlessly sail through life, with windblown hair from unseen winds.  Your opponents will only remember your victories and you will appear invincible to them. Because of this, you will convince your opponents to lose to you long before the games have begun.

Be warned. You will have to ease people into the new you very slowly. You will have to treat them as if they are a frog, boiling in your awesomeness. Little by little, you can turn up the heat. You will have to work this way because, no matter how much you want it, you can’t just all of a sudden be completely not uncool.