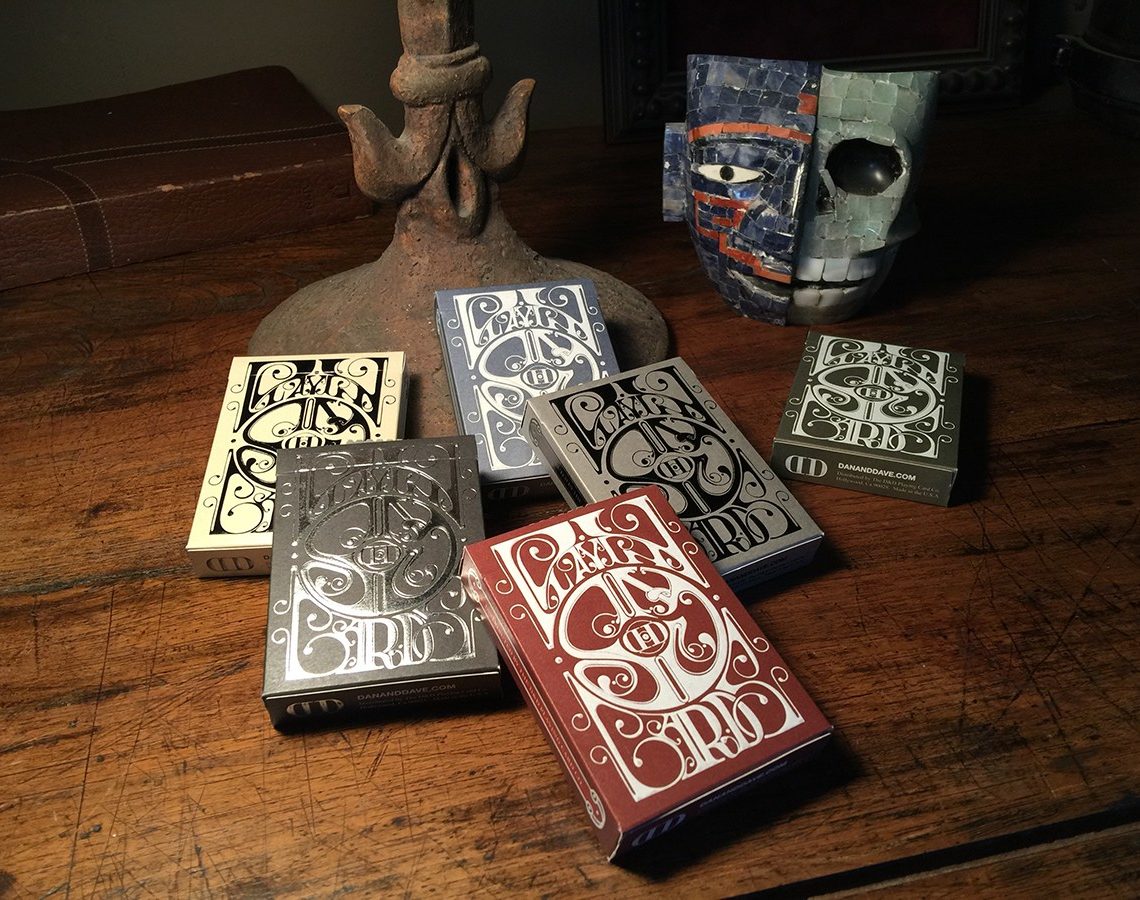 There’s a reason that 8 runs of Dan and Dave’s Smoke and Mirrors decks have been produced. They’re amazingly elegant and people just want to get their hands on them. They remind me of girls I dated in school who were just too darned classy for me. They never judge my clumsiness and always make me look better just by being with me.

There’s no visual storyline hidden in these decks because their design isn’t about that – they’re more about beauty in simplicity. From what I can see, the decks were created for collectors, cardists and magicians who love weaving tales with their hands. Below is a great link of The Icarus Sequence which is a series of flourishes that references one of my favorite stories.

The performer’s name is Huron Low and to me, his technique is somehow both inspiring and sickening at the same time.

You can pick up loose Smoke and Mirrors decks of your favorite colors on EBAY or get them ganged in a box set. Each set is an instant collector’s item and comes with a serial number on velum. The truth is, I’m not interested in saving these decks for a re-sell. I’m interested in fumbling with them now and even though I stink at card manipulation, these cards behave as nicely as any I’ve ever touched.

It’s clear that these decks are a labor of love to Dan & Dave. In fact, they almost seem to be like their children – each one even has a special name. He’s a flashy deck with metallic blue ink on the ace of spades, the Joker and anything that would normally be red.

And then there’s the lovable Carbon – This deck is treated similarly to Denim but with grey metallic ink instead. The thing that sets Carbon apart from the others is its dark and mysterious printing on the inside of the case.

But don’t forget about Smoke – This deck is void of metallic inks all together, but the off-white card-stock makes it my favorite.

And then there’s Rouge – This is the hussy of the set. It teases you with a red accent color that can only be found on the Ace of Spades and The Joker.

And of course there is Eco – Eco is the hip, green one and sports appropriate metallic ink throughout the deck.

And lastly we have Mirror – Just like the others, Mirror is very elegant but the thing that makes it unique is the reflective finish on the inside and outside of the box. I think it’s safe to say that there’s something for everyone when it comes to the Smoke & Mirrors collection. And it’s clear that Dan and Dave really care about their craft – there are subtle touches of awesomeness that seem to pop up just about everywhere. But the real star of the show is a designer named Si Scott. He’s the illustrator that came up with the ridiculous illustrations on the boxes, the jokers, the ace of spades and the card backs. Mr. Scott is a UK based Graphic designer who graduated form Leeds College of Art & Design. I’ve only just recently been introduced to his artwork but it’s clear that I’ll be a fan for life. If you want to see more of his art you should check out his website.  He’s a pretty busy guy but I hope that one day I’ll get the chance to sit in one of his graphic design lectures. But for now, I like that I can have a mini-printed portfolio of his in my back pocket.